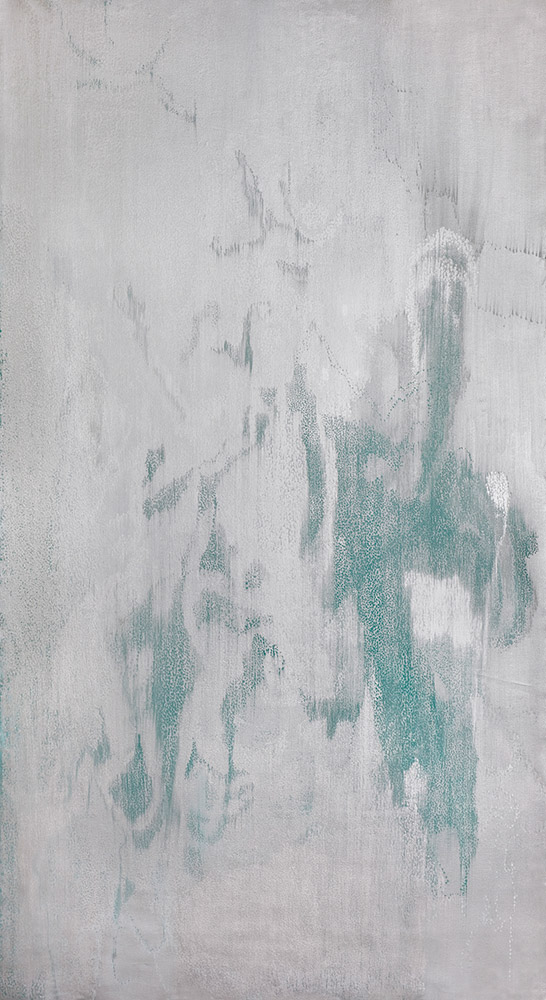 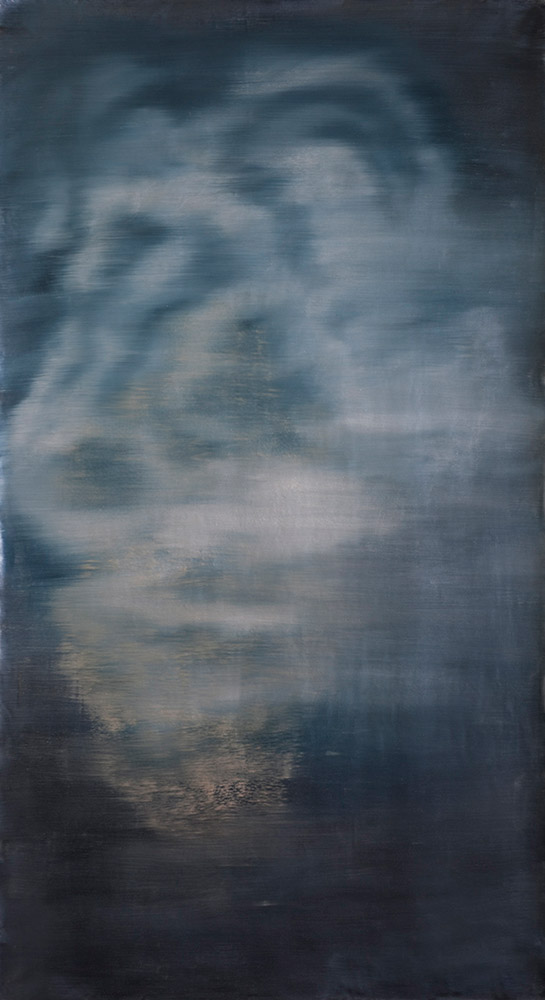 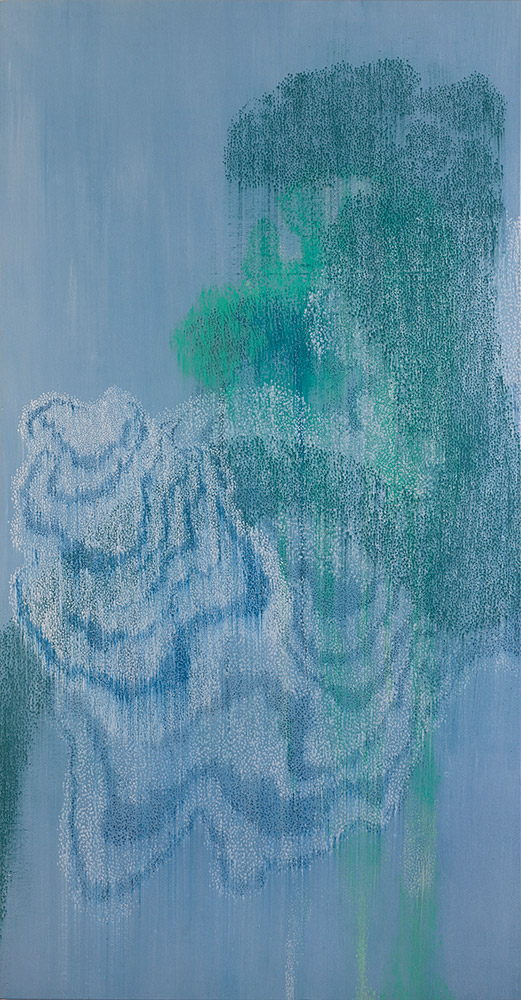 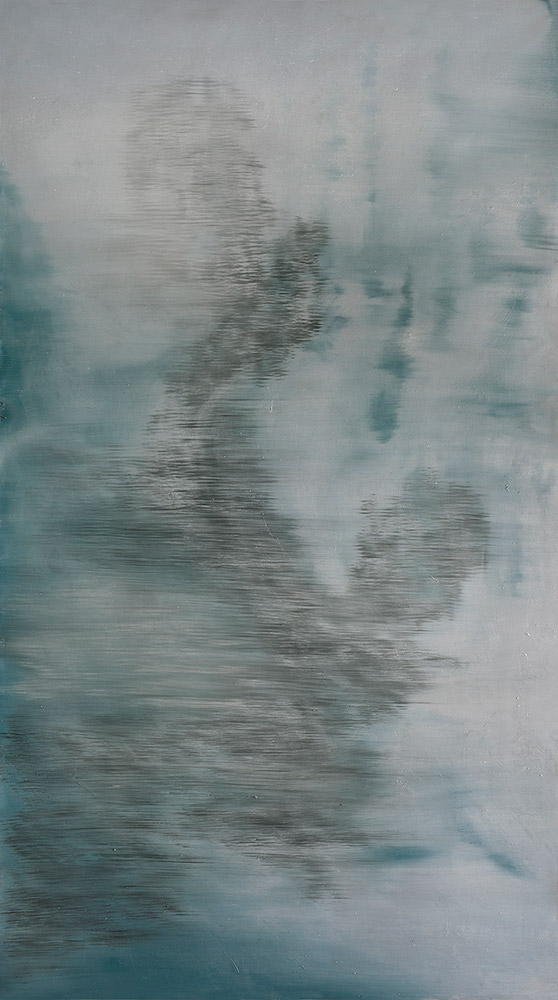 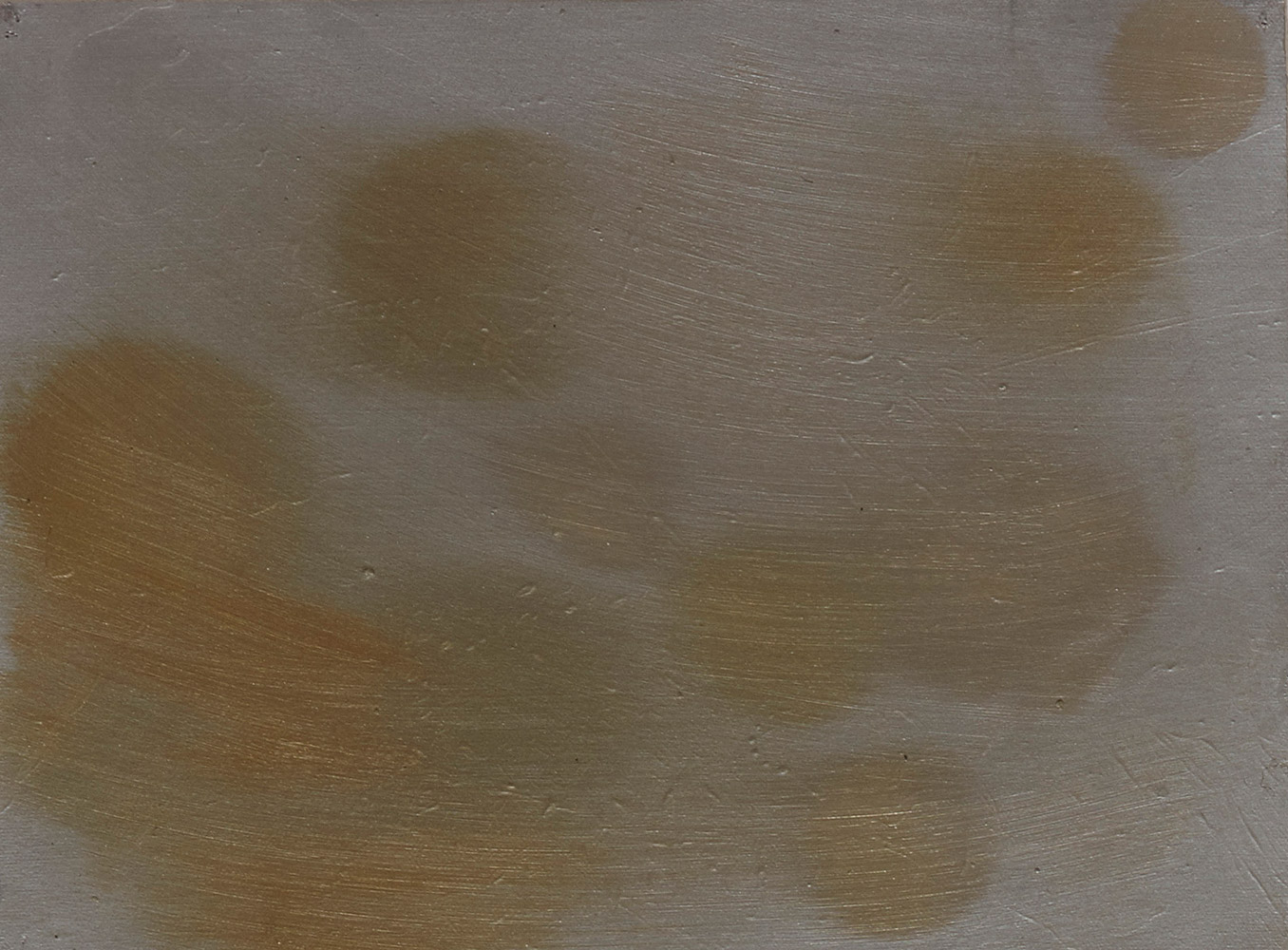 The attempt to paint the ungraspable

Half self-taught and half academic, Margarita García Faure brings together the characteristics of the restless artist who uses a disciplinary diversity that sustains and strengthens the work.

Her artistic training, as well as her connection with art gradually moved towards what the artist synthesizes as "a becoming". Having begun with the volumetric study of the forms in sculpture, then she began working with oil paint which became the material that made it easier for her to enter the pictorial world through dots and spots - components that today make up the majority of her body of work.

Her work carries an inherent solemnity, organic and misty. It could be translated into the same action of looking at a sky or a landscape, but blurred, on a canvas.

García Faure maintains a close relationship with nature and its modifications, sometimes imperceptible. That is what interests her. Those in between states of change and variation.

The artist spoke with the Museum about her exhibition "Immense" that can be visited until 6th December, and she expanded on some ideas about her work:

- What is your training?

I studied visual arts with the artist Sergio Bazán and the historians Hugo Petruchansky and Valeria Gonzalez. In the last two years I attended the experimental film workshop with filmmaker Claudio Caldini. At a formal level, I studied sculpture teaching at the "Prilidiano Pueyrredón" National School of Fine Arts. Parallel to my pictorial training, I have studied dance and have traveled a lot, visiting museums and meeting artists.

- What prompted you to dedicate yourself to art?

I was always close to art. From a very young age and at some point I decided that all my energy would be devoted to artistic production. I think it was the need to create images, the need to be able to say something in a particular way and always have a challenge ahead.

I started by painting volumes, at that time I was studying sculpture and the observation of inflated shapes was something that attracted me a lot. Later, as I deepened my relationship with oil painting, I began to paint very intense colored backgrounds on which I drew with fine brushes shapes derived from those initial volumes. At some point those lines disintegrated and I began to paint large spots made of tiny dots. These dots accompanied me for many years, while I dedicated myself to investigating with great enthusiasm the different vibrations of color; the decomposition of forms; the compositional forms of expressionism; and it is when I painted the Paraná River on a large ten-metre canvas that the points began to disappear into the fabric. Then I started to work with painted glass in dialogue with those fabrics. About two years ago, gold and silver entered the scene together with the study of the pictorial movement and from there came the attempt to capture the forms that nature creates and breaks at every moment. The attempt to paint the elusive. Now the fabrics are wrinkling, and little by little I am returning to concepts of sculpture, with volumes in spaces. When reading what I write, I think I could say that my process has not been interrupted by majour changes, rather it has been a “becoming”, where each work has led me to the next and so forth.

- There exists a constant relationship between your work and the elements and manifestations of nature, air and water, rain and wind, can you explain that link? Does that relationship have a particular investigation behind it?

I think my main interest is in the perception of the subtle, in what exists for an instant before becoming something else. The moment a fresh drop of paint has a particular shape and then it changes into another. In nature we see that all the time, nothing is the same in the course of hours, everything changes. It's just a matter of speed. In the sea, in the air, these changes are quick - and that is what I am interested in: the idea of freezing the form in an attempt to paint the 'unpaintable'.

- Is it possible to define an aesthetic and poetic search in your work?

I guess so, it's a bit difficult for me to define it. I could say that I am in constant dialogue with minimalism when it comes to putting together the installation, the forcefulness of form in space, and in some ways, with the expressionistic, where I am constantly looking for the human gesture on a canvas. I think that what guides my poetic search is the evocation of the subtle and the elusive.

- Hugo Petruchansky in 2004, wrote in the catalogue of the exhibition “Giant” (Recoleta Cultural Centre) that your works "are distinguished, differentiated and authentic works that enable one to enter the world through new words." Do you think that the existence of a work is another contribution to all the readings in the world through language?

Yes, of course, that's why I paint and that's why I exhibit! I am very interested in communication, the possibility of awakening a new thought, a new perception, or at least establishing a possible dialogue with my contemporaries through my works.

- Could you tell us more about the process behind your paintings, the strokes and the layers in Immense? Does Immense represent the last stage of your work?

The fifteen paintings lined up first began with a blue background; then the silver pigment mixed with oil was brushed over those blues and it was only then that the shapes began. There are many layers of paint in each work, and I have constantly used the big brush to drag / comb the oil as I finished each painting, giving the sense of speed to the painted shapes. On the glass panes I reproduce and decompose a painting, each glass is painted over and not everything is visible. The golden works have gone through the same processes of painting layers and layers of oil, only that they have been exposed to the outdoors, and entered into direct dialogue with the rain, the earth and the folds, that are a whole new process that act as one more coat of paint. Immense represents the last stage of my work which is also in dialogue with paintings that I will be presenting in Buenos Aires in a month, where in addition to having folded fabrics there will be cut paintings, cuts and voids that converse with gestures loaded with matter.

Margarita García Faure paints after painting itself, and does so before the gesture can gain consciousness. The painting process is an expansive movement of which a mere instant is captured; technique being a partial reflection of a cosmic dynamic. Transparency is Margarita García Faure’s lens, as demonstrated through her multiple glass pieces. In her larger canvases, the mist reduces the vivid intensity, and the color, or its absence, offers its own mysterious quality. We believe to see landscapes in these paintings because we can sense the forces that create these images: the undulation of light, molecular agitation, geological layers. And if under the surface a trace of embellishment appears, as cinematographer Heinz Emigholz says, it is because it symbolically represents the lapse of time in its form.